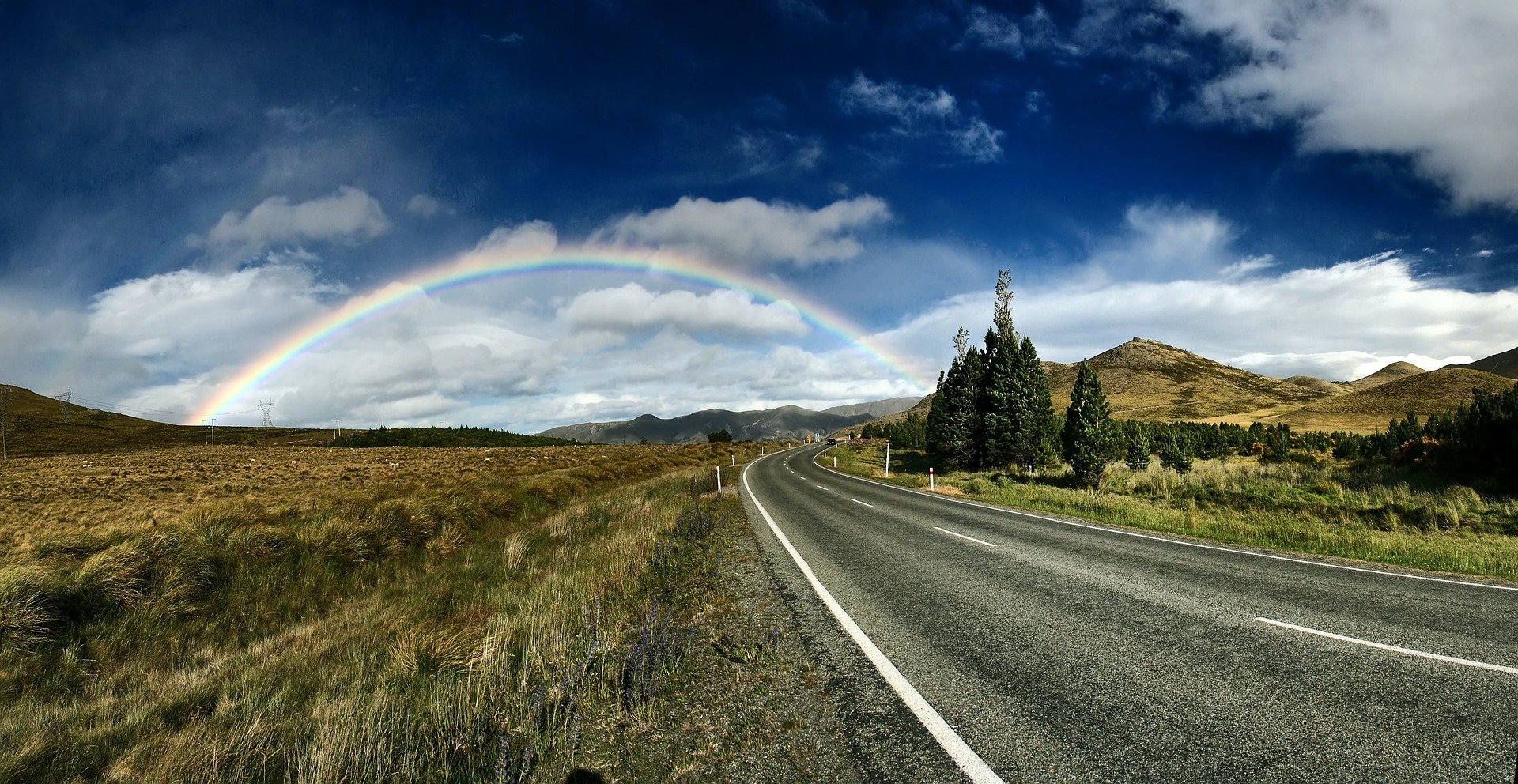 You can’t help but feel happy when you see a rainbow. They’ve been interpreted as divine messages, adopted as symbols of various causes and movements, and used to decorate just about anything you could imagine. So it might surprise you to learn that one of the most recognisable features of the rainbow is not actually as it seems…

A rainbow is a semi-circular arc

There is more to a rainbow than meets the eye. The semi-circular arc is simply the part of the rainbow we can see – the rest is usually obscured by the ground.

First things first – how does a rainbow form?

A rainbow forms when sunlight hits small drops of water in the air. Water is denser than air, so the light slows down and bends (refracts) a tiny amount when it enters the water drop. The light bounces around inside the raindrop, then exits again at a different angle. As we know, white light is made up of lots of different colours (Red, Orange, Yellow, Green, Blue, Violet) which all have different wavelengths and therefore different amounts of energy. The colours with longer wavelengths (the ‘red’ end of the spectrum) bend less than the colours with shorter wavelengths (the ‘violet’ end). This is what causes the light beam to split into that recognisable spectrum of colours that is so familiar to us.

Where can I see a rainbow?

The rainbow you see depends on where you are standing relative to the light and the raindrops. The sun has to be behind you, and the rainbow will form at an angle of 42 degrees from something called the ‘antisolar point’, which is roughly marked by the shadow of your head. (In other words, if you drew a line from the shadow of your head to your eyeball, and another line from your eyeball to the rainbow, the angle between the lines would be 42 degrees.) This means that if the sun is lower in the sky, the rainbow will appear higher, and vice versa.

Can I go to the end of the rainbow?

The rainbow’s position depends on your eyes’ position. This means that if you move slightly, so will the rainbow that you see. And someone standing next to you will see the rainbow in a slightly different position. And THAT means that it’s literally impossible to walk to the end of the rainbow. (Sorry.)

That’s a shame. Are you going to tell me what shape a rainbow is?

Of course. Consider that 42 degree angle you drew before, between your head shadow, your eye, and the rainbow. The water drops at the correct angle from your eye to form a rainbow aren’t just in one spot. They’re in an arc, all around your eye. ALL around, meaning that if you replaced the ground with a bunch more water droplets (or your vantage point was high enough), the rainbow you’d see would be a complete circle!

That’s amazing! But…there’s a but, isn’t there?

Yep. But…if you’re ready to have your mind blown even further, consider this.

A rainbow therefore isn’t a fixed distance away from you, the observer – it can be anywhere there are droplets of water at the correct angle. If you are unlucky enough to be standing in a solid rainstorm with the sun shining behind you, there are rainbow-forming droplets everywhere from right next to your eyeballs, to several kilometres away.

So a rainbow isn’t just a two-dimensional circle…it’s actually a three-dimensional CONE. With your eyeballs at the point, and your head-shadow (the antisolar point) at the centre of the cone’s base.

Next time you see a rainbow, make sure you inform the nearest fellow observers that it is, in fact, a rainbow CONE.

And if you’ve managed to get your head around this, head on down to your nearest ice cream shop and treat yourself to a triple-scoop cone – you have certainly earnt it.